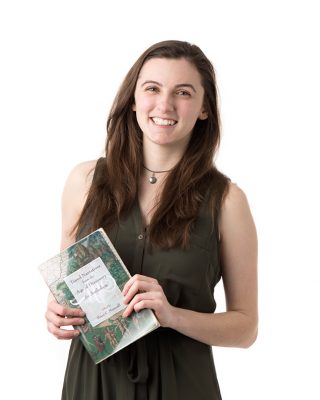 “Right when I arrived on campus, I fell in love with Mount Vernon, the campus, and the people,” Jillian said. “And, even though I came from a semester plan high school, I was really interested in the block plan. I felt like it was a really good system for study abroad, and preparing me for the future.”

Jillian always wanted to study anthropology and biology. The faculty she met upon her arrival solidified her desire to pursue her fields of study—Professor of Anthropology Misha Quill and Professors of Biology Marty Condon and Tammy Mildenstein.

Despite Jillian’s belief that the block plan was the right fit for her, she knew it would be an intensive method of learning, a challenge she took on and mastered. She’s discovered the not-so-secret benefits of the block plan—it teaches you to learn balance, between coursework, clubs, sports, and filling out grad school applications.

“Now, after lots of practice and long nights, I am really aware of, and surprised by, how much I can get done,” Jillian said. “I recognize that Cornell is really putting me in a good position for school and life later on.”

Jillian is not only an academic star, but she is also an outstanding athlete on the volleyball team.

“As I have just finished up my last volleyball season, I have been reflecting on the countless hours, emotions, and sweat I have put into the program, and volleyball as a whole,” Jillian said. “I am very proud to have finished my last season here at Cornell.”

She should be proud. She’s chalked up many achievements in the four years she’s played at Cornell: AVCA Honorable Mention All-American; First Team All-Midwest Region; Midwest Conference Player of the Year; First Team All-MWC; Two-time MWC Performer of the Week; Two-time All-Tournament; and many more honors.

Jillian also took on an internship at The Field Museum in Chicago in the integrative research center as a Cornell Fellow. Jillian organized data for a community garden research project, which she then returned to work on the following summer.

“From the internship, I was able to gain insight into how anthropology research is designed, conducted, and analyzed,” she said.

“It was a great opportunity to solidify my love for anthropology and gain real-life experience in the field.”

All Cornell Fellows keep a blog about their internships so their learning experiences can be shared with the rest of the Cornell community.

“It required a lot of hard work and preparation to apply and bring the knowledge back to the Cornell community,” she said. “Most importantly, the Berry Career Institute program has allowed me to extend my learning outside of Cornell and into the real world.”

Jillian’s next big achievement will be the work she takes on in medical anthropology in graduate school as she works toward a Ph.D.

“Zamora’s—because I always need a place to study, I love late night snacking, and I am completely dependent on coffee.”

“I think becoming a Peer Advocate for Student Life my senior year was an extremely impactful experience. I loved the positive atmosphere and meaning behind the position. It really helped me start off my year on a positive note.”

“Jalapeño Poppers at Zamora’s—because they have gotten me through really long study nights.”