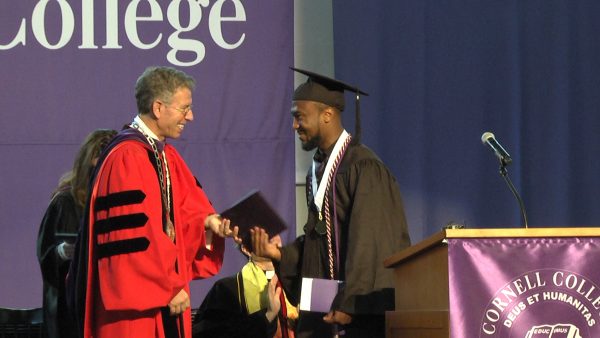 Suleiman Shehu ՚19 wants to be an agent of change in his home country of Nigeria. The desire to see economic growth in Nigeria inspired his choice of majors—politics and religion.

In Shehu’s junior year, he took a religion course with Professor Steven Sacks and it was through Sacks’ encouragement that Shehu began to study how religion influences politics.

“Religion and tribalism are important in Nigeria and are frequently used as weapons by politicians and religious leaders to divide the people of the country,” Shehu says. “This division affects political and economic development.”

“Cornell faculty are always looking for ways to make your education unique,” he says.

For Shehu’s capstone, he wrote an honors thesis exploring the impact of the trifecta of religion, politics, and culture on economic development in Nigeria. He feels it was his biggest achievement while at Cornell.

“It means everything to me—my drive, my goal is to try and see how I can contribute to changing Nigeria from an underdeveloped country to a developed one,” says Shehu. “The major underlying problems are corruption and incompetence at the highest level in the system.”

Shehu sees a potential solution but knows it would be extremely difficult to achieve.

“What we need is a cultural revolution from the top to the bottom strata of the country that will change the current attitudes and norms that perpetuate incompetence in government offices,” says Shehu. “Another solution is the overhaul of the existing institutions, especially in the educational institution; the curriculum is too colonial and outdated. A broader curriculum that connects to the reality of Nigerians and that emphasizes critical thinking and problem-solving skills must be created.”

Shehu decided his path to becoming a changemaker was through law school and that has been a singular focus while at Cornell—preparing for law school.

“I can’t do it alone, but as a citizen who wants to see Nigeria continue to exist for many generations to come, I have to try to bring change in my way and hope other people want change in the country as well,” Shehu says. “When I was 16 in high school in a government class, we were talking about the problems in Nigeria and about ways to bring about change. I had a feeling that if I had a law degree, I could help bring about change through the rule of law and due process. I hope with a law degree that I can contribute to changing the current legal system that is in shambles. And if the legal system starts functioning, that will have an impact on economic development.”

Shehu says it took a team of individuals at Cornell to help him achieve the success he sought and he wants to thank them: his soccer coach, Nate Grosse, “for making Cornell home,” History Professor Robert Givens for helping during his first year while he was adjusting to One Course, Politics Professor Aparna Thomas and History Professor Catherine Stewart for “challenging me intellectually in their classes,” and staff members Laura Farmer in the Writing Studio and Jodi Schafer at the Berry Career Institute for assisting him through the law school application processes.

Next up for Shehu is law school.