Kim embraces the global influences in her life

Kim embraces the global influences in her life 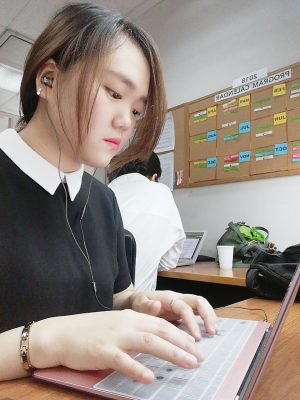 “He got me very interested in Cornell’s One Course At A Time and this ultimately made me decide to apply to Cornell,” Kim says.

Kim is a double major in art history and religion, one of Cornell’s international students, and a Cornell Fellow: a Mathews Fellow in Asian Studies, who traveled to the Philippines to intern at the Asia Society Philippine Foundation in Makati City. During her 8-week internship, she assisted the foundation with events featuring speakers on specific topics. The first event she worked on focused on social media.

“I worked with three other interns and a supervisor to research background information, make questions, specify themes, and plan promotions,” Kim wrote in her Cornell Fellows blog. “Once there was a draft, our executive director gave us on [the] spot advice and additions. Being the only intern without a business, policy, or politics major, the executive director was interested in my ideas and explained that it was important to approach any type of work from different directions to see what is best for the audience.”

Kim also worked on two additional events, one focused on Filipino cuisine and chefs and the other was for the Asia Society Film Festival. She began to better understand herself and her place in the global society we all live in through her experiences.

“I came to realize that the world is quickly becoming a global world where culture and history are intermeshing,” says Kim. “I have pride in who I am and where I’m from. Being Korean is a blessing and a gift. But this doesn’t mean I ignore the traits that I learned in the Philippines as a child or the characteristics that I am currently gaining in America. They are all a part of me. This is the beauty of being an international student.”

Kim was born in the Philippines and moved to South Korea when she was nine. She attended an international foreign school in South Korea until high school and then completed high school in Philadelphia in the United States, living with her brother who was in graduate school at the time.

“I truly believe traveling and living in a different country widens the vision and knowledge in ways a textbook cannot,” Kim says. “I came to embrace the differences and similarities I share with people around the world.”

Kim’s plans include graduate school in the United Kingdom.

“I am looking forward to doing further research on the impact of the Chinese art market and how it is becoming one of the major art connections between the West and Asia,” Kim says. “I am interested in seeing how this will affect neighboring countries. In the near future, I hope to see myself working for the global art industry and becoming a strong voice for the relationship between Asia and the West.”