Shares:
By By Katie Mills Giorgio

Trever Greene ’19 knew he wanted to play football in college. So when his high school football coach, Lucas Stanton ’07, suggested he take a look at Cornell College, Greene did.

Little did Greene know, his former coach’s advice would also lead him down a career and coaching path as well. 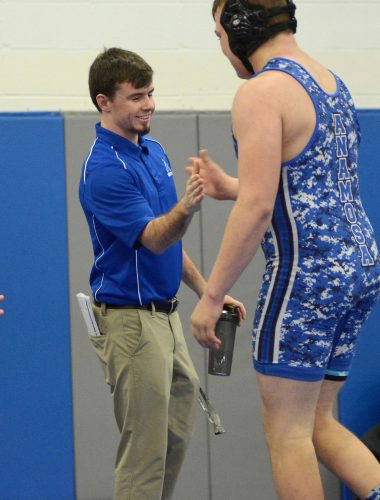 Stanton, head football coach at Anamosa High School, reached out to Greene—who at the time was just finishing his sophomore year at Cornell—when he needed help on his coaching staff. “Trever is probably one of the most self-driven athletes I’ve ever coached,” Stanton says. “He’s just very motivated and a hard worker. I knew he was interested in coaching, and I thought this might be a good way for him to get his foot in the door.”

Despite being a full-time college student and athlete, Greene embraced the opportunity.

“I knew I wanted to get into coaching, but not this early of course,” says the education major. “I just jumped into it and everyone has been really supportive. My fellow coaches at Anamosa and the athletic director have been working with me a lot and that has helped me succeed at coaching at a young age.”

Greene started by assisting with the strength and conditioning program and football camps during the summer, working with some 120 high school athletes. That led to Friday nights, during his junior year of college, on the sidelines of the high school football games as one of Stanton’s assistant football coaches.

Later that school year, Greene was asked to step up as Anamosa’s head wrestling coach.

Greene had wrestled since he was 5, was a four-year starter in high school, and learned from the late Coach Mike Duroe as a member of Cornell’s team until he was sidelined by an injury. Greene ultimately decided to follow his role model—his father—who was his wrestling coach until middle school. “I still get plenty of advice from him now,” he says.

During his first wrestling season, Greene was selected as high school Coach of the Week by the local CBS affiliate. Greene says he’s turned a few heads when he shows up to a wrestling meet as the head coach. 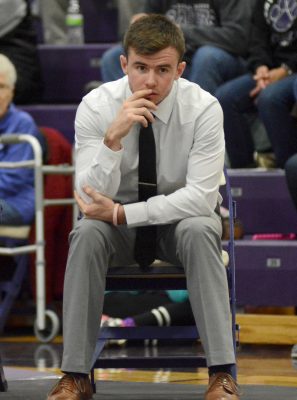 “People are definitely surprised by my age. At first it was difficult because I was so close to my athletes’ age. We had to set some boundaries so they understood I was not just a friend but the coach who they needed to respect,” says Greene.

Mitchell Engelbart, a junior wrestler at Anamosa High School, says the wrestling team is impressed with Coach Greene, admiring the way he coaches, handles his nutrition, and even the way he dresses. “Honestly, I think it is pretty cool and generous of him to spend his time helping out some high school students, because I know what it takes to do that,” says Engelbart. “He is always encouraging us to improve, and since he is younger it’s easier for us wrestlers and even the football kids to relate to him and for him to relate to us.”

Stanton says it has been rewarding to watch Greene transition from athlete to coach.

“He took the same approach to coaching as he did to being an athlete; he jumped right in and worked really hard at it right away,” Stanton says. “There were a lot of things I didn’t have to ask him to do; he just did them. And he leads by example. The students really feed off having a good example to follow.”

Coaching high school sports can be tough enough without having to worry about homework, but Greene has taken that in stride as well.

“The block plan is really nice for being a student athlete and while I’m coaching, because I only have to focus on one course at a time,” he says. “Everyone at Cornell is supportive and that is so cool.”

While an injury kept Greene from taking the field during the most recent football season, he’s incredibly grateful for the experiences playing football for Cornell brought him and the relationships he built with teammates.

Greene is now student teaching at Anamosa High School, and after graduation hopes to begin his teaching career there. “I’d like to stay around the area because I’m a local guy and I know a lot of people,” says the Stanwood, Iowa, native. “I like to help shape young athletes. I was in their shoes just five years ago, so I can relate to a lot of the things going on in their lives. That’s what I enjoy most—being able to help them out as much as I can and make better people out of them. That was me not that long ago.”