Maha Jadallah Harper ’95 never intended to become a citizen of the world. 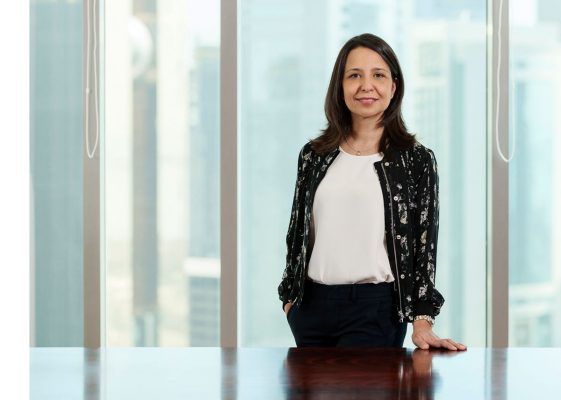 But thanks to her career, Harper has lived in Washington, D.C., Hong Kong, London, and Qatar, working for legal firms and in-house as chief legal counsel. “It’s funny because I really don’t like moving, or too much travel,” she says. “But I’ve learned an amazing amount in all of my jobs.”

Although she spent time living in Texas, her father’s job took their family to Saudi Arabia where Harper finished her primary education and graduated from high school.

She knew when it came time for college, however, that she wanted to return to the United States. Harper and her family looked at schools all across the country. Like many students at Cornell, what caught Harper’s eye was One Course At A Time. “And my parents liked that it was a nice, small town,” she says.

Harper appreciated the ways in which Cornell supported international students, recalling that her host family, Professor of Sociology Emeritus Chris Carlson and his wife Jane, looked after her and invited her to dinners.

While at Cornell Harper studied politics with a concentration in English, thanks to falling in love with her first Cornell course, a Jane Austen class taught by Professor David Evans.

After graduation she went on to get her law degree from Drake University. “Everyone told me my entire life I was going to be lawyer,” she says. “I think people thought that because I was quite opinionated. I’d like to think it’s because I could see both sides of an argument and could bring people together, but that may be wishful thinking!”

She took her first job in Washington, D.C., with the law firm Fulbright & Jaworski. There she connected with the international corporate practice group and her career since has taken her all over the world.

Thanks to her high profile positions—her job in Qatar was for a company owned by a member of the Qatari royal family—Harper is especially passionate about female mentorship in the corporate world.

“I have been a mentor to other women twice in my career, and it was the most worthwhile thing I’ve done. Even with all the strides the generation before us made, it can still be an uphill battle, especially to have women in ‘C’ level positions, like CEO, CFO, and chief legal counsel.”

Now back in London with her husband and their two young daughters, Harper is the chief legal officer for Atlas Group London, a start-up her husband created. The company designs and develops health care technology solutions that can be deployed in remote areas of the world.

“He convinced me it would be fun to do this together, and so far, it has been really amazing. It has been good for our family to have more control of when we work and when we are able to have time off.”

Harper may finally be in control of her own travel schedule.