An alumna whose Cornell College story started in the 1970s returned to her alma mater and brought her own students with her.

“I loved my four years at Cornell,” said Andrews. “I majored in French and English. After a year off, I earned a master of arts in teaching in secondary English education at the University of Iowa, and I have been teaching French or English ever since.”

After Andrews saw Associate Professor of French Rebecca Wines and Professor of French Devan Baty at a conference in Martinique, the three decided to bring Andrews’ students to the Hilltop. The Johnston group visited Cornell on April 24. Many participated in a Beginning French III class with Cornell students, and others went to the Cultures of France and the Francophone World class in order to experience a block course and interact with current Cornellians. The students also took a walking tour of campus, learned about the admission process, and ate lunch at the Hilltop Café.

The Johnston High School students weren’t the only ones who benefitted from their visit.

“Cornell students had a chance to practice discussing their French studies in a cohesive and compelling way, to share their growing knowledge of the French language and Francophone culture, and to mentor–in miniature–high school students who are investigating attending college and furthering their study of French,” Wines said. 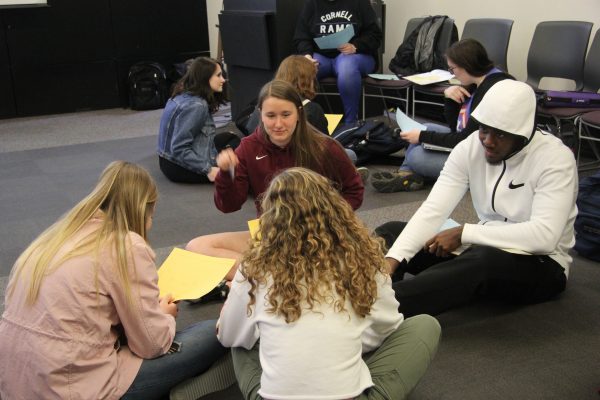 “No matter what the potential employment, knowing another language provides a competitive edge to a job candidate in the United States,” Wines said. “French proficiency, in particular, opens doors to jobs not only in the U.S., where it is the fourth most spoken language and where France is one of the top five investors, but also in Canada, Europe, North and West Africa, the Caribbean, and elsewhere.  The French-speaking world accounts for nearly a fifth of global trade in goods, and France itself has one of the largest economies on earth.”

Andrews, whose daughter also attended Cornell and studied French, underlined why language study and college are not simply a step toward a job.  She wants her students to come away from their visit with great memories of the Hilltop and a better idea of what a future studying French could look like.

“I hope they will learn that the journey of their education is just as important as the degree they earn,” Andrews said. “Many of my students say they want to ‘get their requirements over with’ at a community college before going to a larger university. I say that every class matters and each class should be enjoyed–not simply ‘gotten through.’ I love the idea of and work of a liberal arts education, and I fear many of my students may not even know what that is, as they rush to get a career.”

Andrews said her students were able to see themselves in a French class at the college level and imagine life at a liberal arts college, which was the goal for the visit.