Imagine training dragons for a career, or in this alumna’s case, portraying a dragon trainer at Evermore Park. Mallory deForest ʼ13, a Cornell theatre graduate, is an actress at this very unusual experience park in Utah. 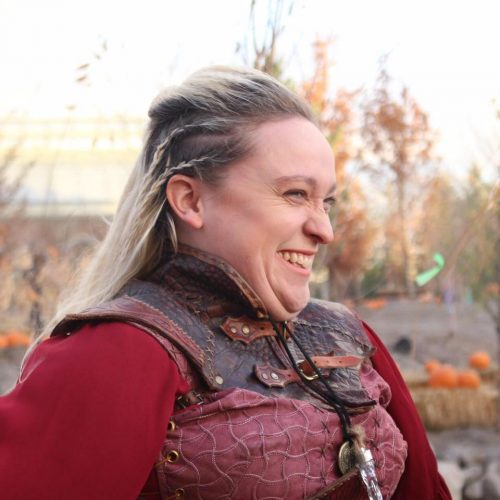 Guests enter a fantasy realm at Evermore Park, in what some have described as a real-life video game set in the village of Evermore. Not only are the guests surrounded by costumed characters (like Mallory), but the whole village has been dressed up to play the part for whatever quest or thematic event the guest adventurers are partaking in that day. Dressing in costume (or cosplaying) as a guest is encouraged.

Evermore has three distinct seasons—Lore, a Celtic haunting in the fall; Mythos, a Norse mythological festival in the summer; and Aurora, a magical Dickensian winter event.

Mallory not only works as an actress in the park but also helps develop quests and storylines for the guests. She enjoys working alongside professionals who’ve worked in television and for Disney.

Mallory considers Jim Van Valen and Janeve West her two favorite and most influential professors while at Cornell and has fond memories of her late night study sessions at Cole Library. She also attributes her time at Cornell, and One Course At A Time in particular, for her ability to manage projects quickly.

“One Course At A Time allows you to focus on the important things and follows much more like projects in the real world,” she says.

Or perhaps in Mallory’s case, in fantasy worlds as well.