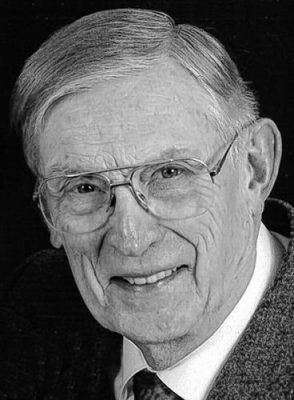 Deskin taught at Cornell from 1956–1989 and was honored in retirement with the establishment of the Deskin Fund to support the kind of teaching and research with students that characterized his career at Cornell. In 2012 one of his former students, Ralph E. “Chris” Christoffersen ’59, and his wife Barbara funded the William Deskin Endowed Chair in Chemistry.

Following is the full obituary provided by the family.

Dr. Deskin served three years in the U.S. Army Air Corps in World War II, a portion of which was in the Pacific Theater (Okinawa). He remained in the reserve and was recalled as a 1st Lieutenant in the U.S. Army Signal Corps in the Korean War.

Dr. Deskin received his B.A. and B.S. in education degrees at Northeast Missouri State University (later named Truman State University) in 1948, his M.A. degree at the University of Missouri, 1950, and received his Ph.D in inorganic chemistry from the University of Iowa, 1957. He held a position at the Army Chemical Center, Edgewood, Maryland, as a civilian in chemical research from 1950 until recalled to service in the Korean War. From 1952–1954 he taught chemistry and physics at Upper Iowa University before returning to the University of Iowa to study for his Ph.D in chemistry. He retired after teaching for 33 years, as Professor of Chemistry at Cornell College in Mount Vernon, Iowa. He was a member of the Visiting Scientist Team of the Division of Chemical Education of the American Chemical Society and he often visited colleges and universities in the Midwest giving lectures on his research and newer topics in chemistry. His research involved the interaction of sulfur with metal ions.

Dr. Deskin was a member of several presidential selection committees at Cornell and was chairman of two dean’s selection committees during his tenure. Dr. Deskin was chair of the science department for several years from 1960–1980. He was a member of a number of national chemistry and science organizations including the American Chemical Society, the American Association for the Advancement of Science, Sigma Xi, Phi Lambda Upsilon, and Gamma Alpha. He was a member of the Midwestern Association of Chemistry Teachers in Liberal Arts Colleges and the Iowa Academy of Science. Dr. Deskin spent several years on the advisory board of the Petroleum Research Fund of the American Chemical Society. He spent three summers as a member of the writing team for the Intermediate Science Curriculum Study at Florida State University. He was a researcher and recipient of several grants. He was known as a mentor and a promoter of student research. One of his student’s Ralph E. “Chris” Christoffersen and his wife Barbara in 2012 set up and funded the William Deskin Endowed Professorship.

Dr. Deskin was honored by the Iowa Section of the American Chemical Society as the recipient of the Iowa Award Medal in 1991, an organization he had served as chairman and he had held several other offices. The Iowa Award recognized his contributions and service to chemical education. He was president of the Iowa Academy of Science in 1992–93 after a long career of service in the academy.

As a member of the United Methodist Church in Mount Vernon, he had served as president of the board of trustees, chairman of the administrative board, lay leader, and choir member.

For many years he served on the Mount Vernon School Foundation as vice president and as president, as well as a six-year term on the board of directors of Chapel View Manor.

Memorials can be directed to the Deskin Fund at Cornell College, 600 1st Street, Mount Vernon, Iowa 52314. The Deskin Fund is an ongoing endowment fund set up at Dr. Deskin’s retirement to fund and support the kind of teaching and research with students that characterized his career at Cornell. The second designated memorial is to the United Methodist Church in Mount Vernon.