Assistant professor of German Studies and History Tyler Carrington knows a thing or two about love in Germany at the turn of the 20th Century. 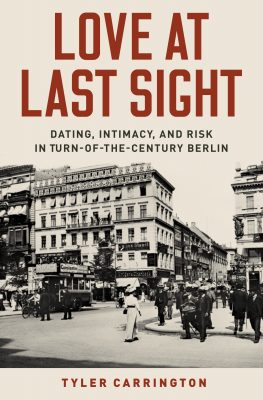 He has studied it extensively and now has written a book, “Love at Last Sight” that he calls a professional historical thriller.

“It’s a story of a personal ad killer and this poor woman, Frieda Kliem, who moves to Belin and tries to find love,” Carrington explains. “She engages in new, avant-garde-style relationships like free love, casual dating, and workplace romance. She is enterprising in the ways she looks for love, and she doesn’t restrict herself to the old conventional means of parents or friends arranging things. Instead, Frieda posts a newspaper personal ad, which is this newly popular but risky technology of dating at the turn of the century.”

The German professor’s book is composed of true stories based on archival research. Carrington spent more than a year searching through old newspapers and studying personal ads. Each day he sat at a microfilm reader in Berlin scrolling through 25 years of newspapers. Then, he turned to Berlin’s police archives, and that’s where he uncovered the story that ties together the chapters of his new book.

“A woman posts a personal ad and finds the person she wants to marry, and the police later find scraps of paper in her apartment where she doodled things like, ‘I want this guy to marry me,’” Carrington said. “He proposes a rendezvous in the forest. She gets all dressed up and goes and a week later the forester finds her body. She had been murdered and what follows is a fascinating police investigation and a high-profile criminal murder trial with all sorts of twists.”

Carrington uses Frieda’s life and murder to explore themes related to dating in the big city around the turn of the century in Berlin, Germany. Carrington said that while many men and women found the usual ways of dating insufficient in the modern city, the city also created a bunch of new opportunities for finding love. His main research question is how people navigated the world of new romantic technologies.

“What historians haven’t explored so much, until my book, is this risk versus reward calculation, the tremendous opportunity that the big city brings for finding love and the very real dangers of actually going for it,” he said. “Berliners faced this complex calculus of modern love: ‘Is it worth it?’ ‘What are the risks?’ ‘Do I risk losing my respectability in order to find a connection when I’m lonely in the city?’”

Carrington knows that at the surface, events that happened 100 years ago might not seem relevant today, but he assures readers they are.

“It might seem like it’s buried under the rubble of the rest of the 20th century, but actually, it can tell us quite a bit about our current dating world,” he said. “While the book is an argument about the past, it’s also an argument that is very relevant to some of the same concerns and innovations and romantic decisions that we all face today, whether that’s online matchmakers, dating apps, or even digital love. I hope readers find some comfort in the fact that they are not the first ones confronting these issues of modern dating and that perhaps this book, in some small way, helps them navigate that for themselves.”

Carrington plans to use his book during his Block 8 class, Modern Europe and Its Critics, this year because he thinks students will enjoy it and learn from it. He’s also thrilled to see the Cornell community get a chance to read his book.

The book is available for purchase by the publisher, Oxford University Press.