In May 1966 Ruth Keefe Miller ’66 walked across the stage at Cornell College’s graduation ceremony. In August she returned to campus, this time as the wife of then-assistant football coach Steve Miller ’65. 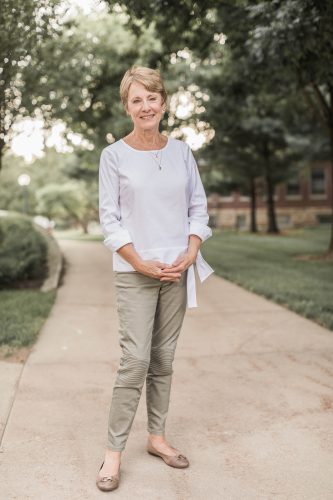 “It was strange,” she says, remembering the meetings, social events, and book clubs that would become part of her routine as a faculty member’s wife. Soon, though, her former professors were among her closest friends.

These two roles—student and wife—are just two of the many Ruth would come to play at Cornell over the last six decades. Cornell was part of her life even as a child, since her older brother, the late Dean Keefe ’59, was a Cornellian.

“I just saw the campus as a kid and thought this is what a college should look like,” she says. “Little did I know this is where my life would be.”

With the exception of eight years in Wisconsin and western Iowa—relocations driven by Steve’s coaching career—Ruth’s personal and professional life has indeed been tied to Cornell in one way or another since she stepped foot on campus in 1962.

“When Cornell has asked, I don’t know that Steve and I have ever said no,” she says.

As the football coach’s wife, Ruth spent many evenings hosting players at their home, baking countless lasagnas and other meals for the endlessly hungry team. She spent many more Saturdays cheering on the team at home and away.

“I enjoyed opening up our home. There was no day off,” she says. “But we loved being back at Cornell.”

During those years, Ruth was also busy teaching elementary school and raising the couple’s two children, Matt Miller ’94 and Sarah. She donned yet another hat—that of a proud Ram parent—in the early 1990s when Matt played football for his father.

Ruth’s service to the college evolved again in 1999, when after 22 years of teaching, she became alumni director. Ruth went on to spend nearly a decade in the role, reviving Homecoming, co-leading Cornell’s sesquicentennial, and making countless connections across the country.

“I’ve always enjoyed being able to really connect with people. There was a lot of responsibility, but it was a lot of fun,” Ruth says. “My mission was to help people feel that pride and connection and help people understand that the students are very much worthy of their support. These students are just amazing. They are. I know them personally.”

That’s not just hyperbole. Those personal connections are real and have spanned miles and decades for the Millers. They’ve hosted Cornell students over summers and semesters, and they keep a room open to visiting classmates. Similarly, the Millers know they have a place to stay in likely any city they care to visit across the country.

“That’s the unique thing about a small college—you make these lifelong friends,” she says. “Life after Cornell, is Cornell.”

These days Ruth and Steve spend a lot of time in the Twin Cities area, where their children and grandchildren live. She says she’s also happy to have time to spend in service to their church, “but that doesn’t mean that if Cornell called tomorrow …” — Carly Weber