Leonard Stewart Jr. ’20 will display his garments in a runway fashion show on Friday, Sept. 28, at 4 p.m. in the lower Berry Lobby of Kimmel Theatre. 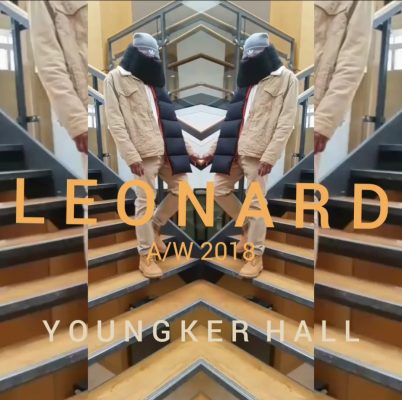 The ready-to-wear collection will feature Stewart’s developing luxury brand Leonard that he makes from recycled material. The Cornell College business management major describes his work as universal and raw.

“What inspires me to design is hip-hop as an art form, and the ability to create anything you want to wear,” Stewart said.

The runway show next to Kimmel Theatre is a nod to the building where he got his start. Stewart began crafting pieces after he took Costume Construction his first year with Resident Costume Designer and Costume Shop Supervisor for the Department of Theatre and Dance Jenny Nutting Kelchen.

“My favorite part of teaching is watching a student find a creative spark in their coursework that leads them to want to do more and find their own voice as an artist or maker,” Kelchen said.

Stewart is taking an entrepreneurial approach toward his goal of a career in business management and fashion design. So far, the conceptual brand has gained the interest of the Neiman Marcus branch store in St. Louis (following his summer internship at the Fashion Fund in St. Louis) and other fashion professionals in St. Louis and Chicago.

“After my clothing made its way into Neiman Marcus, I felt like it was time to showcase my interests to my college,” Stewart said. “Professor Kelchen is helping me with the show, and I believed it would be best to show her what became of the skills she taught me.”

Stewart says he’s planning to sell his garments online and in stores this winter, which means he’s busy fitting in time for his studies and his business work.

“I’m a student during the week and a designer on the weekends,” Stewart said.

The fashion show is slated to take about 20 minutes and anyone can attend, but there will be limited seating so arrive early. Kelchen says she hopes this event inspires other students to learn something new.

“Leonard was pretty new to sewing when he started at Cornell,” Kelchen said. “It’s never too late to learn a new skill and make your own opportunities. Enthusiasm and hard work can really pay off.”