Professor of Psychology Melinda Green is greatly expanding her research on eating disorders with the notification that she’s been awarded a grant for nearly $400,000 from the National Institute of Mental Health.

The grant provides resources for a three-year study to gather data on 180 participants that aims to reveal the most effective ways of treating eating disorder symptoms in women.

“We know that eating disorders have the highest mortality rate of any psychiatric disorder, but they are notoriously underfunded for research and our research lags behind because of it,” Green said. “I’m passionate about women’s issues, and we know that 56% of young women will struggle with some form of disordered eating. It affects our lives in so many different ways.”

More than 15 years ago, Green started researching eating disorders. She’s focused heavily on a theory called the dissonance theory, which is the idea behind a well-known prevention paradigm called “The Body Project” by Eric Stice.

“There’s this theory that if people make arguments against their own behaviors, they are less likely to engage in the behaviors because they feel tension,” Green explained. “They don’t like that and want to resolve it. Studies have shown that a dissonance-based program leads to a reduction in eating disorder symptoms.”

Green’s new study will take that idea of dissonance and tack on additional treatment focused on two risk factors that she’s researched for years.

“We are adding a focus on self objectification, which is our self-worth based on appearance, and maladaptive social comparison, which just means comparing our appearances to the appearances of others around us that we perceive to be thinner or more attractive,” Green said.

The team will conduct assessments three times throughout the trial to check whether participants are improving, which will include: cardiac electrocardiogram data, height, weight, and a psychological assessment.

As a side benefit of this study, the cardiac data will help inform Green’s larger effort to find biomarkers that prove women are biologically making progress. The psychologist has done years of research in which she has discovered a connection between eating disorders and cardiac risks, identifying markers of cardiac risk which worsen with eating disorder symptoms and improve with treatment.

This new grant-funded study will include 10–15 Cornell student researchers, four graduate students, and a full-time postdoctoral Fellow. The team will have an office on the Cornell College campus and one in Coralville (2140 Norcor Avenue, Suite 107).

While Green knows this study could add valuable information to research about eating disorders, she said one of her biggest reasons for pursuing this grant is for Cornell students to get the research experience they need for future careers. 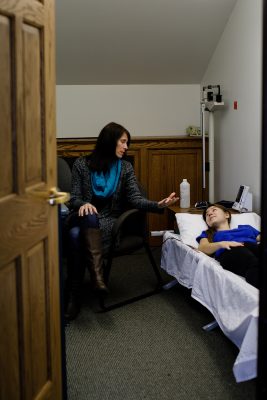 The Institutional Review Board and a team of specialists, including a medical monitor, biostatistician, and eating disorder specialist, will be reviewing the team’s data throughout the three-year trial. Participants will also receive all of their treatment and assessment data at the end of the program, which Green said typically costs women up to $800 for these treatment and assessment services when they seek it out from providers.

For details on how to participate in the study, email Green at mgreen@cornellcollege.edu.