Why money matters: The story of Randy Santiago ’18

Why money matters: The story of Randy Santiago ’18

Randy Santiago ’18 never expected to leave his Chicago neighborhood, let alone go to college. Yet on May 13 he graduated from Cornell College and is headed to Madrid, Spain, with a Fulbright award.

Santiago said he read and re-read his Fulbright acceptance for days in disbelief. In his application essay he focused on the story of his childhood friend, known as Leo, who was killed by a gunshot.

“I hope my story will serve as an example of what a kid from the hood can accomplish when he’s allowed to succeed, what someone like Leo could have achieved had his life not been shortened by gun violence,” Santiago said.

One of four children of Puerto Rican parents, he said he grew up in a society where he felt undesired, unacknowledged, mis-acknowledged, and unsafe.

“I’m the first in my family to receive a bachelor’s degree,” Santiago said. “I’m the only person in my immediate family to have traveled abroad for any purpose. As a child in Chicago, I spent many days and nights without sufficient amounts of food, electricity, and sometimes gas during the winter. I never imagined making it out of my neighborhood, let alone onto a college campus. It took becoming homeless two weeks after my graduation to convince me that college was my best future option. I’m still homeless and still poor, but I became a Fulbright, and I became the first college graduate in my family.”

The need for more financial aid

Despite his success, persisting at Cornell was not easy for Santiago.

He was not satisfied with his financial assistance, which included money from an endowed scholarship fund and $1,200 annually in work-study wages. Still, he decided it was the best opportunity he would ever have to escape the circumstances of his birth. After transferring from Concordia University Chicago, he took on more than $30,000 in loans, more than twice what his mother makes in a good year, he said.

“Most people on campus are middle-class, and they underestimate how much of a burden a loan is. It is not just financial, it is mental and physical as well. For my family, taking out more than $20,000 is obscene. Some family members think I’m making a big mistake,” Santiago said.

The average loan debt of a Cornell College graduate in 2016 (the most recent data available from projectonstudentdebt.org) was $31,975. Although Cornell provided approximately $23.2 million in financial aid to 99.4 percent of its students this school year, it was not enough to meet the full demonstrated financial need of most students. 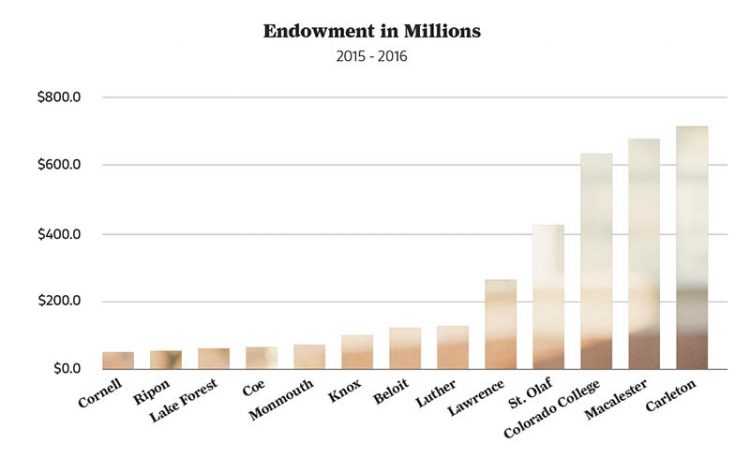 Cornell’s endowment is the smallest among the Associated Colleges of the Midwest (see chart on page 24). Increasing it will provide students like Santiago with larger scholarships and more internships, research, and off-campus study.

All this will result in a richer education at a more affordable cost, adding value to a Cornell College education.

Why endowment?
Cornell’s endowment has been accumulating over decades, primarily through gifts, and generates a permanent source of income. The general purpose of an endowment is to generate income and growth to meet the short-term spending needs of an institution while also ensuring that the institution is viable in perpetuity. Cornell Trustee Richard Williams ’63 is a longtime champion for the endowment.

“Both in good times and in challenging times, the endowment helps to ensure steady financial backing for the college’s superior and expensive level of education,” said Williams, a Trustee since 1989. “Our effort today for the endowment is a legacy—a gift to all of the future generations who will study and work at Cornell College.”

Like Santiago, Dr. Susan Even ’74 was the first in her family to attend college. Her trajectory to becoming executive director of the Student Health Center and chief student health officer at the University of Missouri, Columbia, began when she received a generous financial assistance package from Cornell in 1970.

“The scholarship to Cornell was the primary reason I was able to attend college. My parents were hard-working and intelligent, but from families whose lives had been impacted by the Depression and World War II. They made ends meet so we could get the education they desired so badly but were not able to afford,” Even said.

Her husband, Steve Zweig, who was a first-generation student at Harvard, encouraged her to endow a scholarship in honor of the parents who had instilled her strong desire to be college educated. With help from her siblings, Sara Even Wilson ’76 and Nick Even ’84, she and Zweig established the Paul Even and Bea Even Stuart Endowed Scholarship for first-generation students.

“My parents really couldn’t give me too much advice other than to study hard,” she said. “First-generation college students need more than money for tuition and room and board. They need orientation to the whole college environment with support, guidance, and encouragement to take full advantage of the exceptional opportunities available only on a college campus like Cornell.”

Today Cornell runs a program for first-generation students called Rise Up. And yes, the endowment can fund that too.

The case for high-impact learning

Not unlike most college students, Santiago was motivated by financial incentives when he applied for a Fulbright, summer research, and off-campus study.

He spent one summer on a research fellowship at the University of Illinois, in part because it provided summer housing. He wanted to take several off-campus courses, but again had to choose wisely because he could not afford the extra costs. An off-campus study grant, plus assistance from Cornell’s Rise Up program for first-generation students, provided the extra funding he needed to study Spanish in Guatemala for two blocks, long enough to learn the language.

Amy Jessen-Marshall, a vice president at the Association of American Colleges & Universities in Washington, D.C., said Cornell’s One Course calendar is the ideal setting for the type of experiential, high-impact learning Santiago was seeking.

“Cornell College has a schedule that embeds experiential learning. When you can practice the theory, you increase the impact on retention and successful outcomes,” said Jessen-Marshall, on campus during the college’s Core Curriculum Summit in January.

Research shows that students like Santiago benefit the most from high-impact learning practices, she said.

“The students who need it the most are the ones who most often can’t afford it. First-generation students, students with ethnic diversity, if they can have two to three experiences such as study abroad and internships, their success is significantly higher compared to their counterparts,” she said.

That’s where the Greater > Than endowment campaign fits in. These high-impact practices often carry additional travel, housing, and/or tuition fees, which can be out of reach for a significant number of Cornell students. Thanks to a $200,000 Andrew W. Mellon Foundation grant, this fall the college is piloting a program that will require students to have three high-impact experiences.

“Our One Course calendar makes this so much more effective. Students can do a full-time internship anytime. They have a choice of studying off campus on five continents next year. We want to give more and more students access to high-impact learning,” says Dean of the College Joe Dieker. “But we don’t have enough funding for all students to have these kinds of experiences. Without funding, our plans for high-impact learning won’t work.”

The goal is to build the endowment so that every student can participate in multiple high-impact learning practices, allowing Cornell to be a leader in liberal learning—and our students to be as successful as possible.

An experience everyone should have

Yanicke was a tenacious Cornellian. She created her own program at Cornell that allowed her to get around a bevy of rules and regulations so she could study in Germany and Austria for a semester with her high school exchange student “sister.”

When she arrived in Austria, she recalled, “All my sister’s friends spoke English the first night and then promptly forgot English. Totally forgot English. I did become very fluent at the time in German. I just thought it was a great experience. I thought everybody should have an experience like that.”

Today she is making it possible for Cornell education students to travel the world, either as students or student teachers.

“It will give them that world view,” said Yanicke, a Wisconsin education leader who retired as a special education administrator for the Milwaukee Public Schools. “It will open the door to another country, and they’ll see an educational system that is different from ours. It will show them differences, show similarities in not only people but culture and, hopefully, give them a more open mind.”

Benefiting faculty and students together

Cornell has a long tradition of providing faculty-student research, one high-impact practice that prepares students for graduate studies in particular. The Cornell Summer Research Institute, initially funded by an Andrew W. Mellon Foundation grant, is an area ripe for endowment funds. Another is faculty chairs and professorships.

The power of the endowment can be seen through the Ringer Distinguished Professorship, established by Jerry Ringer ’59 and his wife, honorary alumna Carole Ringer. Four Cornell faculty, so far, have held the three-year position, which includes an annual award of $10,000.

The first to hold the title was Professor of Biology Craig Tepper, who used his Ringer Professorship to fund three students in the Cornell Summer Research Institute. Two of those students presented their research at the Symposium on Natural History of The Bahamas and spent time there working on their research.

“I strongly believe that student-faculty collaborative research is the ultimate teaching tool, and these are the experiences that quality liberal arts institutions provide to their students,” Tepper said.

Another former Ringer Professor, Associate Professor of Psychology Melinda Green, used her funding to conduct clinical trials and worked with 24 students to investigate the most effective methods to prevent and treat disordered eating.

Cornell’s William Deskin Professor of Chemistry, Cindy Strong, also uses her funding primarily for student researchers. Established by Ralph “Chris” Christoffersen ’59 and Barbara Christoffersen, the professorship honors Professor Emeritus of Chemistry Deskin and extends his legacy of conducting faculty-student research to new generations of researchers. Strong’s most recent summer research student won the undergraduate poster competition at a professional academic conference. The trip was partially funded by the Berry Career Institute, set up by an endowment from James McWethy ’65.

How the endowment can benefit students like Santiago
College is where students’ minds open and self-discovery happens.

Coming to a small college in Iowa helped Santiago realize just how Puerto Rican he was, he said. He began to embrace that identity at Cornell by learning Spanish, serving on the Diversity Committee, and joining Union Latinx, where he became president.

“I grew up Puerto Rican but didn’t feel Puerto Rican, not knowing Spanish,” he said. “There aren’t many people who look like me anywhere on campus or off it, so I feel a constant need to prove myself worthy in whatever space I’m occupying. As president of Union Latinx, I’ve also felt the need to convince people that I am capable of leading the Latin student union.”

During his nine months in Madrid, Santiago will use his English and creative writing major, as well as his new skills in Spanish, to teach high school English and facilitate an English language community book club.

“As a Fulbright scholar, I serve as an example of the United States,” Santiago said, “and most importantly, an example of people from violent, low-income, communities of color where people are stripped of the opportunity to thrive.”

This story easily could have had a different ending. But scholarships and additional funding lifted Santiago out of a seemingly hopeless situation, sent him abroad on a research fellowship, and on his journey of discovery right on the Cornell Hilltop. He persisted despite struggles, earned his degree, and has a bright future.

And that is why the endowment matters—and why money matters.