Maricruz Gutierrez-Villa ’14 saw possibilities despite obstacles. It wasn’t that she didn’t have doubts; she had plenty. With the encouragement of others, she always chose to find a way over hurdles (even her own doubts) that tried to box her in. 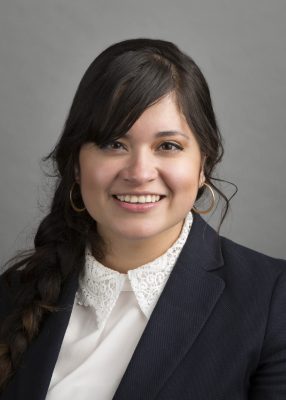 She was born in Miguel Alemán, Tamaulipas, México, but grew up in Rio Grande City, Texas, a small Mexican-American and Filipino border town. She admired her eldest brother, who carpooled to a community college when he wasn’t working to help support their family. He died of cancer when she was 11, but she carried with her his hope: an education could open the world to her.

Maricruz had a crush on the smartest guy in her 9th-grade class. Her English teacher posted everyone’s “Where do you see yourself after graduating?” essays on the bulletin board. She looked for his essay; he wanted to attend Cornell University. At home, she searched for Cornell online and found Cornell College’s page on One Course At A Time: small classes, professors who know their students, immersive experiences, an emphasis on critical thinking. She was sold.

She forgot her crush, but kept Cornell tucked away in her mind. Her mom insisted they would find a way to pay for a solo trip to see Cornell’s campus. She was nervous to fly by herself, but she went.

When she moved into Tarr Hall, doubts percolated as she realized she was surrounded by more white people than she had ever seen before. She told herself, “I’m a college student. I’m here. I’m going for it.”

Soon she found friends who understood her in Beta Psi Eta sorority, and mentors on campus. Career coach RJ Holmes-Leopold ’99 suggested she apply to be a Cornell Fellow. Not entirely convinced, she went to Professor of Art History Christina Penn-Goetsch who told her, you should do this. As a Cornell Fellow, she interned at the Mexican Museum in San Francisco, interviewing artists involved in the Chicano art movement.

In her senior year, Holmes-Leopold recommended she apply to be a Young Trustee. At first she thought, I can’t. I’m not pre-law or pre-med. I’m an art history and archaeology major. Then, she decided, I can see myself doing this. I am worthy of this, and I want to give back to the Cornell community. She applied and was selected as the Class of 2014 Young Trustee.

“I see myself as part of a crime-fighting team in the trafficking of antiquities with other professionals, protecting cultural heritage,” she says.

Her advice to any Cornellians traveling to the D.C. area: “Go to the National Museum of American History and look for the exhibit displaying the jacket of the famous Tejana (Tex-Mex) singer and icon Selena. Go see it!”