Students walked in the shoes of legendary British writers and explored the arts in Great Britain during a course organized by the Department of English and Creative Writing during Block 7. 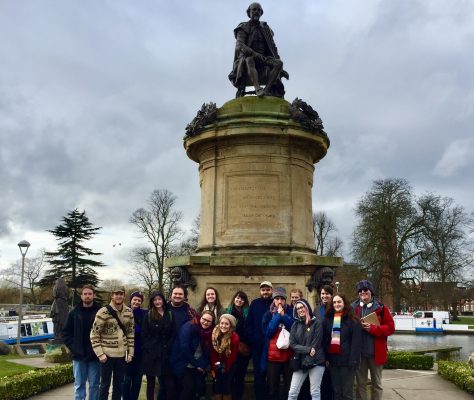 They examined the writings and lives of Shakespeare and Dorothy and William Wordsworth, got behind-the-scenes experiences with curators as they explored book arts and letterpress printing, and studied art and theatre in Oxford, Stratford-upon-Avon, Edinburgh, the Scottish Lowlands, The English Lake Country, and London.

When the class was at the Center for the Study of the Book at the Bodleian Library of Oxford University, the coordinator pulled about a dozen items from the Sonnets 2016 collection. The library commissioned the collection of newly printed sonnets, originally published in 1609, from letterpress printers from around the world. One of the prints was donated by Professor Stavreva and was created on Cornell’s Foxden Press.

“I had no idea this would happen,” Stavreva said. “I had asked the coordinator to arrange a visit to the Bibliographical Press in order to explore the library’s collection of hand presses and type, and to learn, hands-on, about early printing practices. She went above and beyond, arranging for a private exhibition of a part of Sonnets 2016 in the Rare Books section of the library.”

Another surprise happened following a performance of “Macbeth” by the Royal Shakespeare Company. While Stavreva requested a meeting with a few members of the team, the class was surprised to meet almost the entire cast.

“We were stunned,” Stavreva said. “The cast was thrilled to get feedback on the performance, which had opened only recently. A boisterous conversation ensued.”

Olivia Long ’19 writes about the experience in her class blog, saying it’s an experience she won’t forget. She met Christopher Eccleston who starred as Macbeth, but who is also known for his role as the Doctor in the British science-fiction program “Doctor Who.”

“After hearing some wonderful insights on ‘Macbeth’ and acting, in general, from the cast, I had a one-on-one conversation with Christopher,” Long said. “Mostly, we talked about his working-class background and his choice to maintain his Northern accent in roles that would typically require something a bit more posh. He is very passionate about remaining true to his roots.”

The course is offered every two or three years and Stavreva says it’s all about interdisciplinary learning 24/7 as they were living and breathing Scottish and English culture.

“We immersed ourselves in history and contemporary art and theatre; reflected on the ways literary and cultural heritage shapes the tourist experience of a landscape or a noble ruin, caught rainbows over the divide between the Scottish Lowlands and Highlands in Loch Lomond, where ‘continents collide’ (the continental shelves),” Stavreva said. “A lot of personal and interpersonal learning was taking place, too, some challenging, some joyous, all valuable. Friendships were forged, not just within the class, but also with the amazing scholars, actors, and guides we met.”