The March for Freedom: Civil rights activists look back 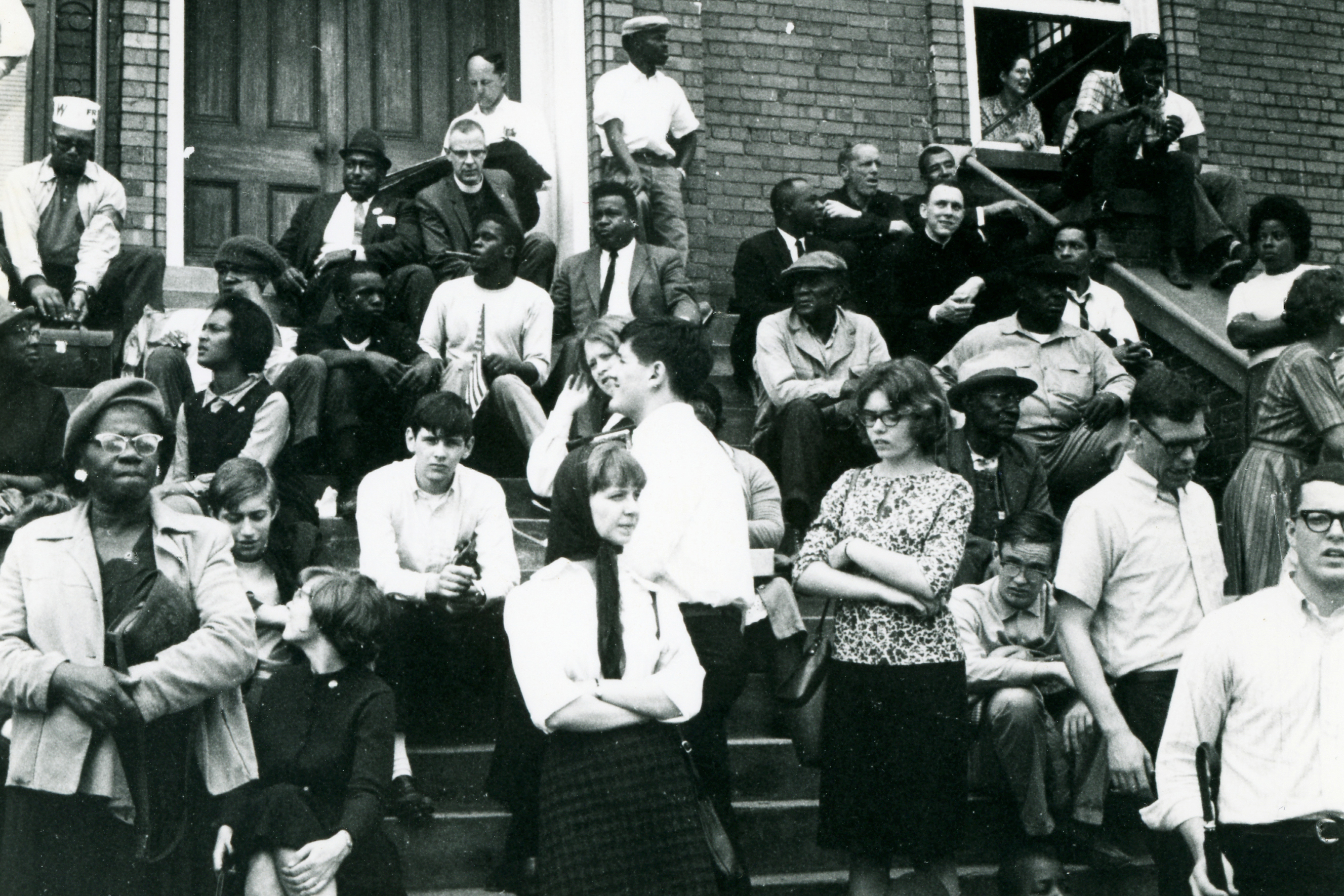 The March for Freedom: Civil rights activists look back

It was March 1965 and news of brutal attacks on civil rights marchers from Selma to Montgomery, Ala., hit the Cornell campus. A small group of students quickly coalesced to drive down and join the reinforcements. By the time it was over, Marguerite “Peggy” Fiero Rietz ’66, Peter King ’66, Roger Davis ’65, John Watson ’68, and several other Cornell students had participated in one of the most famous marches of the civil rights era, helped register voters, been spat on by spectators, and quickly departed Montgomery after the murder of another activist by members of the Ku Klux Klan.

Having been engaged in civil rights conversations during the Rev. Martin Luther King Jr.’s visit to Cornell in 1962, Cornell students were primed for the opportunity to stand for greater equality. Cornellians were active on campus as Professor of art Hugh Lifson led a civil rights vigil and a march through Mount Vernon. Watson said, “The civil rights things were going on constantly—it was just part of the day, it was part of that time and I wanted to participate.” Fiero Rietz studied the Rev. King’s “Letter from Birmingham Jail” in one of her religion classes, and she credits professors Larry Shiner and Thomas Love of the religion department with helping her to develop the critical thinking skills that were instrumental in helping her find her passion in civil rights. She was also a member of the Religious Life Council, a prominent group on campus at the time, known for reaching out beyond Cornell and bringing Cornell students into settings they had never been in before.

After hearing about the first attempted march from Selma to Montgomery, when marchers were cornered and brutally attacked on March 7, 1965, this group of students knew it was time to act. They left with virtually no advance planning. As Watson said, “I decided to go and I went. It was a typical college kid kind of thing—I didn’t think about consequences or preparation until about 15 minutes before.” Davis agrees, “To me it sort of happened. One day we talked about it and the next day we were gone.”

Members of Religious Life Council helped to organize the trip, and with financial aid from student council, and parents willing to help fund gas and loan cars, a group of about 14 students set out for Montgomery. They came from different class years, friend groups, and backgrounds, and some had never ventured outside of the Midwest.

None anticipated the life-changing experience those few days would bring them. Their reception by the other civil rights workers in Montgomery was “unreal,” Fiero Rietz said, “it opened my heart up wide to experience so much love and appreciation from African-Americans and whites alike.”

Their first night in Montgomery, the Cornell group met those they would be working with, people of all ages and different backgrounds, at the Dexter Avenue Baptist Church. They learned the freedom songs they would be singing during the marches and began to get a taste of American culture they had never experienced. Peter King said, “Someone put on Motown music and we all went into the street and danced, right in front of the church.” The students stayed in sleeping bags in people’s homes. Davis remembers “They didn’t have much money, but cooked some of the best meals I’ve ever had in my life.”

In the days that followed, volunteers worked together in groups of four and five, handing out voter registration information door to door in African-American neighborhoods. Davis said, “I do remember that a lot of people were apprehensive when we first talked to them, then opened up and invited us into their houses and offered tea and lemonade.” Peter King said, “How many times had a white person come to their door that wanted to get to know them and help them? Not too often.”

The experience was just as novel for the students working as it was for those receiving pamphlets. Watson said, “I was a kid from Macomb, Ill., all white, had never experienced anything like that. It changed me. I became far more serious about the issue once I was down there and saw more.”

Watson found himself in a frightening dilemma when he and another student accepted a ride from people who turned out to be “a couple of young guys who were wondering if we were some of those northern sympathizers coming to mess up their lives.” Though Watson was able to get away without trouble, it became clear that their goal of registering voters was a complex one, fraught with apathy, fear, and rage.

The capstone of their time in Alabama was the historic third march from Selma to Montgomery. The Cornell students, along with an estimated 25,000 others, joined in the “Stars for Freedom” rally at the City of St. Jude education complex before marching the 3.8 miles to the steps of the state capitol building.

“It was an incredible day. We passed Martin Luther King Jr.’s church, the state capitol had the Alabama flag, there were U.S. flags upside down. There we learned the meaning of a hate stare, but there were just so many people walking arm in arm down the street that nobody created a problem,” said Watson. For Watson, the strongest moment of his time in Montgomery was getting to shake hands with the Rev. King, “I’m proud that I touched the man.”

The national guard lined the streets to keep the peace during the march, but as Davis said, “Several comments coming from those guys made me wonder how safe we were going to be there.” They didn’t face any violence during the march, but the tension between the marchers and the Montgomery citizens was palpable. Fiero Rietz recalled her experience:
I was absolutely covered in spittle from the march. We were marching together black-white-black-white. As we were going through downtown Montgomery, people were hanging out of the windows and spitting and throwing things down on us. Hate, hate, hate. We were holding tight to the arms of those walking next to us. I was soaked through my clothes and my hair.

The marchers successfully reached the Alabama State Capitol Building, and the Rev. King delivered his speech, “How Long, Not Long.” Though, as Fiero Rietz remembers, she was so far back in the huge crowd that she could neither see nor hear him. Listening to the speech later helped her to decide to volunteer in the South the following summer.

As the crowds dispersed after the Rev. King’s speech, the tension broke into violence when members of the Ku Klux Klan ambushed and killed Viola Liuzzo, targeted as a white northerner to discourage outsider support of the movement. Fiero Rietz said:

We had come back to the church, it was late, it was after the march, and we were gathering and people were dribbling in and we were singing freedom songs and then somebody came running in, ‘Everybody’s got to get in their cars and leave immediately and don’t stop until you cross the border.’ It turns out it was Viola—she’d been killed. As I remember we left in quite a panic. There was not time to thank our hosts. We were planning to spend one more night and drive back in the daytime. I don’t think we stopped until we reached Mount Vernon except for gas.

In the decades following their trip to Montgomery these Cornellians had very different life paths and developed different political beliefs, but none of them ever second-guessed their decision to go.

Both John Watson and Peter King served in Vietnam, and feel fortunate to have come of age during the 1960s. Watson said, “Both of these events make me feel like I’ve participated. The country is big and I’m not just another guy who’s living the dream; I’m a guy who has participated and helped and changed.”

Peter King agrees: “Being personally involved in something rather than hearing it in the news or abstraction really opened my eyes and made me more aware and more committed to things.”

Each of the four continues to be a voice for civil rights in his or her own way. For Watson, this civic engagement experience affected how he understands his role in the insurance business, “We have all sorts of social issues, but when it becomes economically advantageous to enact a social principle, then we see change in the United States. In my small way, I’ve made sure that races have equal opportunities in business.”

Peter King and Fiero Rietz expressed frustration with voter ID laws and the recent Supreme Court decision allowing states to change voting laws more easily. Peter King said: “When I hear about the current trends in what people are actively doing—it seems to be to tear apart what we worked so hard to accomplish. When you look at the current voter suppression laws under the guise of stopping voter fraud, they’re preventing democracy, and preventing people from executing the right to vote. It makes me angry in a personal way that they would try to reverse what lives were lost and what so many suffered for.”

Following her time in Montgomery, Fiero Rietz joined the Southern Christian Leadership Conference in the summer of ’65 to register voters and educate community members in Virginia about voter rights. Having come from a large Southern family, she faced difficult criticisms from some family members. Yet she never lost her drive to work for greater equality, often testing her own feelings by her touchstone, a quote from the Rev. King: “I have almost reached the regrettable conclusion that the Negro’s greatest stumbling block in his stride toward freedom is … the white moderate, who is more devoted to ‘order’ than to justice.”

Fiero Rietz takes the Rev. King’s words to heart. “Break out of the cocoons you live in, expose yourself to the larger picture and larger world,” she said. “With my own grandchildren one of my greatest concerns is that they would only know the suburban American dream—I want them to understand the bigger dream that Martin Luther King gave us.”

Davis continued his political activism by working with candidates he supported on both sides of the political spectrum, including Dick Cheney and Alan Simpson as well as Bill Richardson. He wants college students to be active in the causes that matter to them. “Get involved,” he said. “Don’t just stand back and watch stuff that’s going on. Learn first-hand what’s going on. Do some research, figure it out, and get involved.”

This article was the idea of Cornell librarian and archivist Mary Iber, who died Jan. 2, and who will be greatly missed.

The names of those who traveled to Montgomery for the Selma to Montgomery march were listed in the March 26, 1965, issue of The Cornellian: